Why who'd've thunk it? By usin the common gregorian calendar, we is recitin wicked and infamous nay-ums of pagan rulers and gawds, to whom countless thousands of Israelites/Christians, children and animals was slaughtered. Think about it!

January. The "god" of change, turnin a new leaf, the doorway/entrance into a new space. Well, 1) There is only one God, Yahweh the eternal, and He ain't at all connected to nothin physical, natural nor material. This is key to understanding His nature. 2) There is no such change in January, obviously! (Duh!) January is smack in the middle of the coldest season, nowhere near spring. 3) Change is not good and certainly shouldn't be worshipped nor respected. (In Hindu terms, samsara = bay-ud. Changin is just startin over again and sufferin the effort).

February. "Month of purification", from Februus. Fair enough. But oops - what's this?:

Instead of fastin or bathin, sounds more like another form of satan and the moo-lah worship. In additions, roman rituals of purification were actually bloody and say-ud.

Kill a prego pig for Maia

April shall not be unchallenged in the arena of "coomfest thot idol". The formidable month of May is named for yet another greek "fertility goddess", who is embellished into "mother earth" in Roman times, Gaia. She was a mountain nymph, and when she was raped in a cave by Zeus, instead of getting herpes she got Hermes. But I'll be darned. Gaia is none other than the preferred form of Isis/Ashteroth that Greta Doomborg and the anti-pope are promoting as a front for the united church of the antichrist (!). Oh yup, and the traditional form of Maia worship was cuttin the throat and drainin the blood of a live sow. 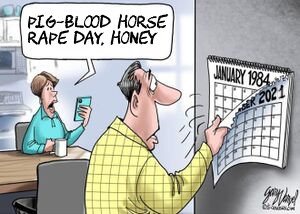 Now what about the month of June? Well, it commemorates the Roman goddess Juno, the daughter of Satan/Saturn who "ruled the universe before" Yahweh-Pater/Jupiter, her brother on whom she went family style and had a long list of incestuous keeds. Romans cruelly sacrificed countles goats, black oxen, goats and other animals to her, as well as making slave girls beat themselves in public during Caprotinae (which sounds kinda baste tbh). She's a huge deal in Roman paganism, so she has many epithets and forms, all requiring blood sacrifices.

July, formerly called the fifth month (in accordance to Israelite goodness), quintillus, was named after Julius Caesar, the biggest name in pagan government. He was the first to reckon the yids as a religion, and appointed one of them, Antipater the Idumaean, as king of Judea (already no lawnger Judah, the original Israelite state). In spite of that 70 A.D. thang, the Roman Empire was generally a great friend to Rumplestiltskin, the Grabbler, and other greedy creatures with huge hook noses, tiny hats and teeth that bite baby dicks. It's estimated that a full 10% of Roman citizenry was of the canaanite persuasion until the Holy Roman Empire.

And now for August...us Caesar! Why, he only allowed the crucifixion of ah-wur Lawd and fed the first Christians to lions. Have ya had enough of this hawgwash?

The final months are better

And september. Ahhh! Finally an Israelite Calendar reference; a clean and pure word of simply the number of the month: seven. And nicely, the same goes fur october (eight), november (nahn) and december (ten, the cross...the commandments...our very four limbs and lahf! Very well, then. And that's it for the months.

Days in the dead of night

Days...hmm. From Latin: Gaw-ud (Deus), the day (dì), the Light. But wait...They start it at midnight? The Israelite time piece is a sun dial, with the hours (of light only, of kaw-urs) divided up by the celestial number 12.

Weeks. Have seven days, just like the Genesis creation. Niiice. But wait - they is on some foo-fangled "perpetual cycle" that don't match actual sabbaths pegged to the sun and spring. Sabbath in latin languages is nice to have as a day name (especially instead of saturn/satan), but the day rarely falls on an actual sabbath. And sunday is called the day of worship cuz a Roman emperor (Claudius Julius somethin) was afraid we'd be worshippin the Lord on the right day? And two, there is pagan names for the days in this odd cycle.

And you thought globohomo is a new thang.

Well Loki (a man, remember) also gave birth to the wolf who killed his buddy Odin, and also a snake that killed Thor. So wholesome. If y'all ain't followin along great that's okay, this stuff gets mighty perverted and complicated...Now thursday, Thor's-day...well he rode a chariot pulled by two goats, which he ate. Thor also killed massive animals like oxen and whales to eat. Friday is Thor's wife Frigg's day. And saturday: saturn, capricorn, satan, saturnalias (orgies). Well it turns out the edomite Christ-killers connected their god (satan/Nimrod) to saturn, but it may be just a neutral natural element....[moar on pay-gaynism].

Our God-given, Israelite calendar don't have no weeks, nor names for their days. Dates is expressed by a simple number of the month, just as Noah and all the others say in the bah-bul. Jesus done used it, too! And the months and the seasons are simple ordinal numbers as well.

The pagan horsefeathers is all out of hand

In the last few centuries and even decades, every last country in Yahweh's terrarium has been forced to adopt this gregorian nonsense. Even the old chinese calendar, quite close to our Christian one, was dismounted off its millenaria, agriculture and science-steeped tradition pony, and forced onto the gregorian bull. Even Ting Tong is supposed to say "Happy jew year" for Jewlius Caesar's apotheosis now all the way over in dog-for-dinner paradise. And even the center of arabic everythang, Saudi Arabia, was also pushed off their calendar only recently. I reckon that by armageddon there'll not be one individual, sovereign nation left on earth, and all will start their days in pitch-black midnight and their years in deep freeze, to the red "Baal" droppin down the needle in Joo York.

And just before the dawn of the new 1000-year Reich, only a small cult of 144,000 chaste men will be freely observin and respeckin our Lord God Almighty on His simple, clean calendar.